June 3, 2013  CUNY starts continued education off right with pots of steaming coffee(Dunkin!), a ginormous fruit platter (Pineapple!), and a diverse array of bagels(Sesame!).  As a willing guinea pig of CUNY Publishing Institute’s  inaugural class, I give it a capital F for fantastic. For anyone who couldn’t shell out $$$, here’s a recap of vitals you missed.

Professor John Oakes is articulate and soft spoken, he puts us instantly at ease, joking about looking like a game show host with the mic, while emphasizing “this isn’t a class where I lecture”.  A kernel on his background:  after working with  various independent sellers, all of which were fundamentally flawed with what he likes to call the ‘stumbling man’ model where you throw everything at the wall and see what sticks, he helped found OR books, a publisher which sells directly to consumers and only distributes to retailers like Amazon after 6 weeks.

“If you’re being charitable, call the process an “art”. If you’re being descriptive, call it rampant insanity” J.O. Returns are a big problem with the traditional publishing model. Given the innate guess work of the industry, when some titles don’t sell as well as projected,  stores too often return them to the distributors or to the publisher. These words go to die at a warehouse where they eventually get pulped; it isn’t the kind you like in your OJ.  To add salt to the wound, book stores will return the same amount of books that they purchase on the same day so they can keep their invoice open and never pay the publishers. Hey indies, here’s what it means for you. 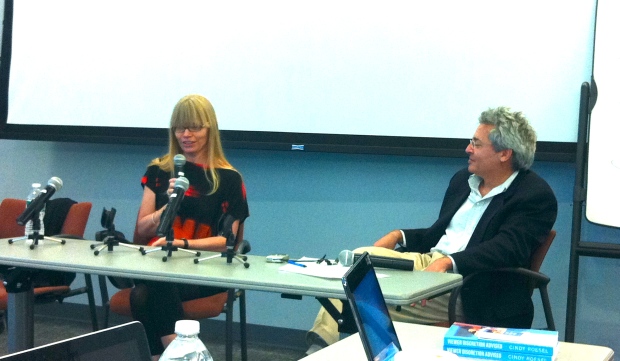 After working with 4 traditional publishing companies including Farrar, Straus and Giroux, Ballatine, Smithsonian, Elisabeth reminds us how much has changed since the days when publishers like Strauss were family owned, and the boss could add a little $$$ when things got tight. Back then, sales and marketing teams weren’t even allowed into editorial meetings. Imagine that. Or don’t.

On the four major booksellers:

On modest advances and the midlist author:

Elisabeth defines a modest advance in terms of big publishing as 25 -50 K. Though frontlist books are hot tamales, there’s a real need for midlist books because they have a longer shelf life than the fast and furious ones. For us newbies, here’s a great explanation of basics here for front/back/midlists.

On Sweden and really old men:

Fluent in Danish, she spearheaded the english rights for the Swedish book: The hundred year old man who climbed out the window and disappeared, which was a huge seller for Hesperus Press, a a UK publisher with a  staff of 5. Always root for the underdog.

On a cross platform success:

In addition to the majority of my childhood, Disney also owns ABC. So it was only natural for Hyperion to get involved with the ABC show Castle which includes a novelist, a cop and a romance.  Hyp pitched a book written by the fictional writer from the show, Richard Castle. Though B&N wasn’t in this idea, the books became so popular that Hyp created 3 short novella e-books when show was off the air. #tvpower!

On the value of book reviews:

It’s nice to get a book review, but word of mouth is what really matters. Culturally, reviewers are a dying breed.

On the social media gap in the market:

Authors need social media gurus, not entire PR firms. In fact, for one of their italian cookbook authors, they hired a social media guru that tweets in perfect broken italian english. Structurally, social should be integrated with marketing and PR though some of the big 6 don’t follow this model.

On the category most impervious to electronic:

For Hyperion, it’s mostly cook books and traditionally “male” categories such as history and biographies.  My dad is obsessed with war history, so I can attest the latter is 150% true.

Richard Nash, VP of Community and Content of Small Demons 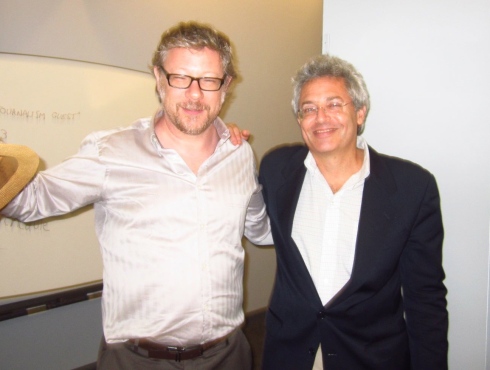 Nash ‘s stream of consciousness was interestingly and entertainingly hard to follow at times. My tagline for his company would be “Small Demons helps you connect the dots in the constellation of the pop culture universe”. Their site shows it best for the book High Fidelity.

On how it works:

On the name Small Demons:

The author Borges notes “the history of the universe is the handwriting produced by a minor god in order to communicate with a demon”, and Nash believes this symbolizes a fictional world that’s bigger than our own.

An e book is basically a website, it’s an epub file is a bunch of html files zipped up in an archive with links. How’s that for layman’s terms?

On our ancestral behavior and why it’s relevant today:

Our ancestors were generating content long ago when they gathered around the fire and recited funny and rhyming epic poems to help them remember important tasks like how to harvest. Nash, like many of his virtual predecessors, firmly believes that “things to evolve around what’s convenient” .

On Coca Cola recruiting his services:

Let’s say you’re reading an ebook that says “chinatown” and you click to see your local chinatowns or buy chinese products. Wouldn’t it be gravy for brands to endorse their products in lit?  Not at all, actually, as Nash has found that brands are not that interested in books b/c they are small fish that take ove a year to properly grow and fry. Brands, instead, are becoming publishers themselves rather than throwing advertising at people with catchphrases.

“Writer and reader are the same god damn person”he declares, and loves the internet for this very reason. Writers should  bring their manuscripts directly to the reader. Not so coincidentally, writers can do this on Red Lemonade, a platform created by funk master Nash.

On the rise and recycle of fan fiction:

Fan fiction is when you you love a book so much you write your own version. According to him, everything is fan fiction to some extent. For ex, Anton Chekov’s play, The Cherry Orchard, mimicked another russian play, but it worked out because Chekhov was a “fucking genius”.

Nash is a twitter feed hashtag waiting to happen: “Reading is more intimate than sex; you have another person’s voice whispering in your ear for 15 hours, at least during sex you can close your eyes”. 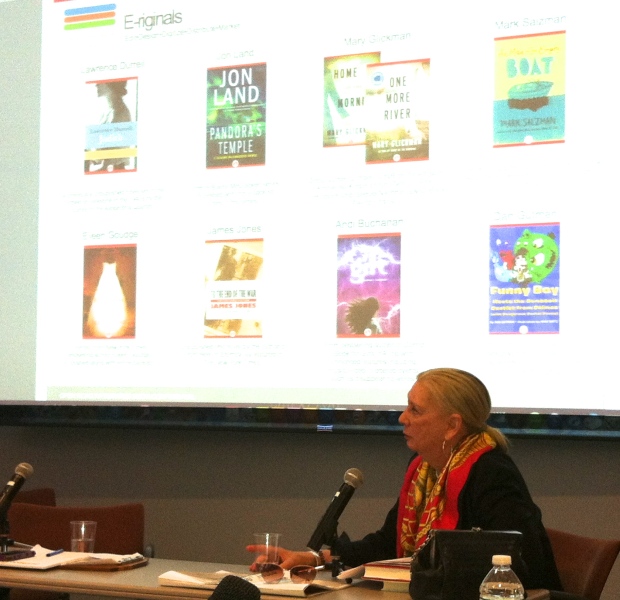 Jane graduated from NYU and knew it was either Wall St or publishing. She took a job in finance, hated it, and the rest is history. And by history, she walked into the Random House HR section and got her first job on the dictaphone, the forerunner of the ipod. She boasts 90 WPM even today. Challenge accepted.

As the former CEO of HarperCollins, she did quite well by bringing Murdoch and group about 1/10 of their profits by the time it all fell apart. I can’t help but be reminded of this inspirational article and the chapter of my life appropriately titled “Laid off? Look who’s laughing now”.

On a focused, ebook only vision:

“I wanted to go back to the future and bring back the greats,” Jane says, “there’s no reason why great authors from 1970 shouldn’t still be making money today.” Her determined demeanor would convince anyone, especially since she’s referring to Open Road’s business model of ebooks only. Unless it’s Pearl Buckman’s last manuscript “The Eternal Wonder”, which they manage through a POD agreement with Ingram , they are sticking to their digital guns.

On their proprietary marketing platform:

They operate on a 50/50 profit share where Open Road takes care of the marketing/merchandising and any digital costs, while the author provides all content. They kicker here: there are no advances! I repeat, NO ADVANCES. Authors are instead paid quarterly. Jane believes this is the core of their business model and it will not change.

Open Road has 42 employees;  the majority are under 30 years old and about  1/2 are marketing leads. Having worked at BBDO, I can say that Jane’s presentation looks like a pitch deck for AT&T around Father’s Day, targeting their audience aggressively and strategically through  banner ads, landing pages, and promotional offers with strong calls to action. Jane’s a firm believer that an old dog can learn new tricks; not only in theory but in practice.

Open Road has raised 13 million and are working on their next 10. They’ve come a long way since their first business plan, which she admits  was the “worst thing ever”. On the bright side, her reputation allowed her to get in touch with the right people. They now have 3 investors, one of the best being Golden Seeds, a VC who only backs women who spend their own money.

The top of every slide displays their philosophy: Edit, design, digitized, distribute, market. For the digitize step, in their CMS, Open Road makes sure to tag every relevant word of the book including, plus any related content to the author’s brand. In doing so, they can build powerful stories around each author in-house and  push out to the following 5 verticals:

On not selling direct:

Open Road is not ready to be a destination though Jane does admit their margins would be higher if they sold direct. However, she’s always supported the retailer and is “old school” in that way.

On need vs want of DRM:

All their books are DRM currently, but Jane’s not sure if it’s necessary even though authors and  e-tailers usually want it.

On creating a successful digital campaign:

For a campaign they started called banned books week, Open Road created a dedicated landing page, ran banner ads, and even got google play involved with their promotional reels.  Everybody was happy with the Google play deal: the authors still got full price but google kept the consumer price low. They generated revenue of $400,000 for deep back list books.

On being stranded on a deserted island with only 1 book:

Jane does not hesitate with her answer To Kill a Mocking Bird. Her runner up would be One Hundred Years of Solitude. And, if she had to be stranded with one of her authors, it’d be Alice Walker.

After an amazing first day, John leaves us with an interesting fact: the famous bookseller Citylights has a bestselling book, and it’s a blank one. So the popular question lingers: are bookstores becoming the Dodo’s of the retail world? Will they face the unfortunate fate of record stores? Personally, I hope and pray they will still be around when I have children and my children have children. There’s something so lovely and irreplaceable about visiting a physical home for books; no matter how small the real estate. If bookstores do survive the uphill battle, it will most likely be the niche stores that prosper. In the classic case of The Lion and the Mouse, the mouse can always surprise us.

Dear Reader, Life is not insta-perfect. We could all use a bit more honesty, humor, and sparkle in our lives. Positive energy is a practice. All my love, CeCe View all posts by cecechic